Review number two for Sci-Fi Month! This week it’s The Rush’s Edge, the debut novel by Ginger Smith published by Angry Robot. This fair and unbiased review was conducted with gratitude for the free electronic copy of the book which I received from the publisher.

This review contains affiliate links for the wonderful Bookshop.org, meaning that if you make a purchase by following them, I will earn a small commission (which I will inevitably put towards more books).

Tango & Cash. Butch & Sundance. Riggs & Murtaugh. Everybody loves a classic buddy partnership, right? Well, get ready to add another pair to that list. Hal and Tyce are destined to win a place in the heart of anyone who should be fortunate enough to read The Rush’s Edge.

Plying their trade as scavengers on the edge of the galaxy, the pair are immediately imbued with a roguish charm, a la Malcolm Reynolds or Han Solo. But these two aren’t like those almost larger than life, archetypal characters; they’re altogether more believable and human, even if one of them (Hal) is a vat grown soldier with a compulsion to seek out fights. When “The Rush” hits Hal, it’s Tyce who is able to talk him down from his genetically engineered combat high, their years of serving together in the ACAS (Armed Forces of the Coalition of Allied Systems) allowing him a degree of control over him. There is a believable and consistently heart-warming camaraderie between the two of them, the kind of platonic love between male friends that just doesn’t get acknowledged nearly enough in most science fiction. It is instantly established that nothing can come between the two, years of trust immediately evident in the way they behave around each other.

Joining the two friends on their crew is Vivi, recruited by Tyce as their “tecker.” Much of the worldbuilding is done very organically in conversations with Vivi, as she learns about life on the Edge from the rest of the crew. There’s lots of detail about exactly how ACAS functions too, much of which comes out in conversations with and about Hal. As a vat, he has been grown, conditioned and surgically modified to be the perfect soldier, then cast out of the military after his seven-year term has ended. Whilst he is required by his biology to seek out action, and more than wiling to pick a fight, he does possess a strong moral compass of his own, and it tends to only be those who deserve his retribution – or are asking for a fight themselves – that end up on the receiving end of his fists.

There are plenty of said fights too, and not just in the form of punch ups. A salvage mission beyond the Edge attracts some unwanted attention for the crew, and it’s from this moment on that the action really ramps up, with shootouts in a variety of locales and even some space battles. There’s never a dull moment, and these scenes are always exciting and visceral. Injury detail is reasonably graphic without being ghoulishly so, and the staging of these scenes makes them easy to visualise, with settings not overburdened with lots of unnecessary description. Every fight or big set piece action moment really rattles along, with extremely satisfying payoffs. Thanks to the fantastic relationship building and characterisation between these scenes, the stakes always feel high too.

Hal and Tyce are particularly well developed as characters, but Vivi is also excellent – the exchanges between her and Hal, as they struggle to trust each other thanks to his conditioning and her recent past, are layered with meaning and emotion. Even Beryl the ship’s medic, who is more of a supporting character, gets some wonderful moments with the rest of the crew. This is arguably more Hal’s story than anyone else’s though, and it’s not only an interesting decision on Smith’s part to make “The Muscle” the centre of the story, it’s a winning one. Hal’s arc is excellent, and you’ll be desperately willing him on when he faces moments of doubt and indecision. His character is much deeper than first appearances might suggest, as he struggles with life outside the military on an almost daily basis, as well as fighting to control his violent urges. His loyalty to his crew is also touching and absolute, without ever feeling cloying.

The perfect combination of excitement and heart make The Rush’s Edge an easy book to recommend, and the loveable characters make it a hard book to leave behind. There is huge potential for more stories in this setting too, with plenty of foreshadowing and ideas which are just begging to be built on.

This is a terrific book, which really feels like the start of something special.

The Rush’s Edge is available now, published by Angry Robot. You can order your copy here, by following a shiny affiliate link to a company who support indie bookshops.

9 thoughts on “Book Review: The Rush’s Edge, by Ginger Smith” 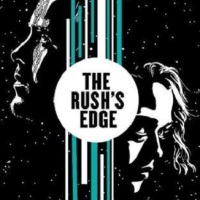